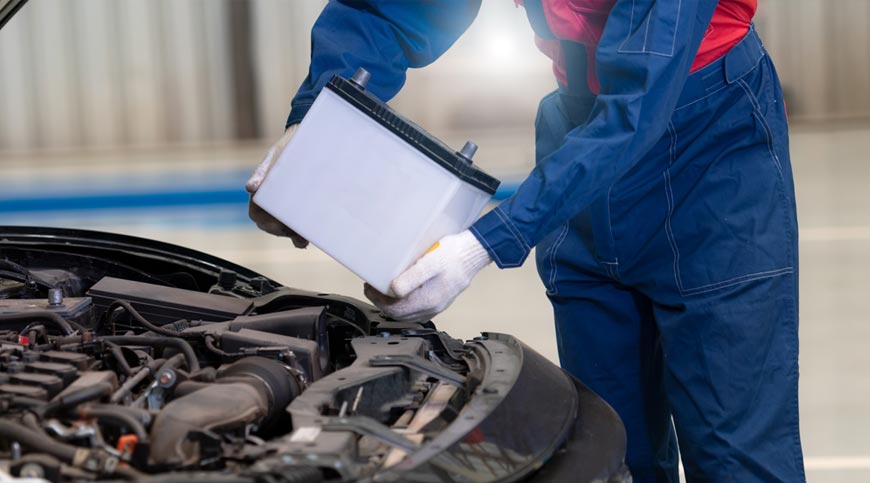 Your car battery is one of the most important parts of your car. Newly replaced Battery

There is nothing more frustrating than trying to crank your car engine on a cold day for work and seeing that it refuses to budge. You check for the problem under the hood; everything seems fine except for the part where the battery is located. Corroded terminals, a bad smell, and even the battery case being misshapen – you figure out that your car battery is badly in need of replacement. Thus, you are forced to call a mechanic to have it replaced and get all the damaged components fixed.

Your car battery is one of the most important parts of your car. Not only do you need it to start your engine but also to power up all the electrical components within our car such as lights, radio, GPS, Climate Control, etc. Ideally, a car battery should last around 4 years before needing replacement. However, a lot of factors can cause the premature expiry of the battery, requiring you to have it replaced earlier. In this short guide, we present you with 8 signs it’s time to replace your car battery.

Does your engine need a lot of cranking before it starts hummering? The problem could be that the battery simply can’t keep up the same amount of charge as it used to and is slowly dying out. Consider replacing it as soon as you can before it finally kicks the bucket.

If your car headlights are not appearing as bright as they used to, it could mean that the car battery doesn’t have enough juice within it. Consider taking it out and having it recharged. If the problem persists, it may be a good indicator that your battery is dying and needs replacement.

If the battery is giving out a foul odor, like that of rotten eggs, that’s a telltale sign that the battery is leaking gas and has become faulty. Keeping such a battery can be dangerous and damage or corrode other components in your car. Have it replaced immediately.

In the majority of the cases, if your car engine cranks but fails to start, the problem could lie with your car battery, which might not be giving enough volts to get the engine running. Take the battery out, have it recharged and put it back in. Alternatively, use jump cables to jump-start your car and keeping it running for half an hour or so. The car should start again normally. If it doesn’t, the battery would need to be replaced.

Even if the car is back to normal, there is no telling how long the charge will last in the old battery. Take precaution and buy a replacement battery just in case, lest you end up stranded in the middle of nowhere because of a battery that gave out at the most importune moment.

5. It Was Jumped A Lot Already

There are a lot of reasons why even cars with relatively new batteries may need to get jump-started. It could be because you forgot to turn off the car’s lights, took out the car after a long period of dormancy or there was a problem with the starter. Regardless, if you had the battery jumped more than three times in a single week already than it might just need to be replaced.

Jumping your car battery is quite hard on it and doing it frequently can quickly damage it and shorten its lifespan. Ironically, a damaged battery would need even more jump-starting to work and thus, get harmed further. Not only that, but you might also be ruining your starter and alternator in the process. Save yourself the hassle and risk of costly repairs by replacing the old battery with a new one.

Extreme temperatures, as well as built-up of too much acidity in your car battery, can cause its case to swell and crack. If you notice your car battery to be anything but a straight-sided rectangular shape, it is high time you have it replaced.

7. It’s Already Past its Prime

As mentioned already, the average service life of a car battery is 4 years. If you have kept the battery longer than that and it is functioning normally, good work! You seem to take well care of your car properly. However, it is still best to express caution and have the battery’s performance tested regularly. For most people, this should start once the battery reaches its third-year mark.

8. Corrosion is Building Up Too Quickly

The build-up of corrosion around the battery, including the terminals is normal. This happens due to the effects of the outside elements the battery is regularly exposed to. Often, you can use a reliable car rust cleaner to prevent it from creeping up into the connecting parts. However, if you notice the area around the battery corroding too much and too quickly, it could be that the battery is at fault and needs replacement. Often, excessive corrosion can be a result of a leaking battery or one whose inner fluid levels are too low.

A lot of factors can influence how long a car battery can last. The most frequent culprits are hot temperatures, a faulty charging system and a build-up of dirt and rust.

In hot climates, car batteries last a shorter while. This is because they are more chemically active at higher temperatures, increasing the risk of damage to its internal structure. In addition, in hot temperatures, the liquid inside wet-batteries gets more easily evaporated, increasing its acidity.

A faulty charging system can also prematurely drain a car battery and reduce its lifespan. The most common risk factor is a malfunctioning alternator that either fails to give out ample voltage or keeps the charging circuit running even the car engine is shut.

Lastly, dirt, grease, and rust can cause the circuits around the battery to come less efficient and restrict the flow of current, causing the car battery to work extra harder and die prematurely.

Does a New Battery Need Charging?

This used to be the case but nowadays, modern car batteries come fully charged and can be plugged into your car right out of the box. Be sure to check if the battery you purchased was from a trusted manufacturer or dealer.

Even with the knowledge at hand, sometimes it may still be hard to know exactly when is the proper time to have your car battery replaced. A professional can have your car battery checked as part of your servicing and maintenance and tell you with more accuracy when to have it replaced. We provide full auto servicing for residents of Philadelphia and surrounding areas, book your service today by calling 215 259-7500.