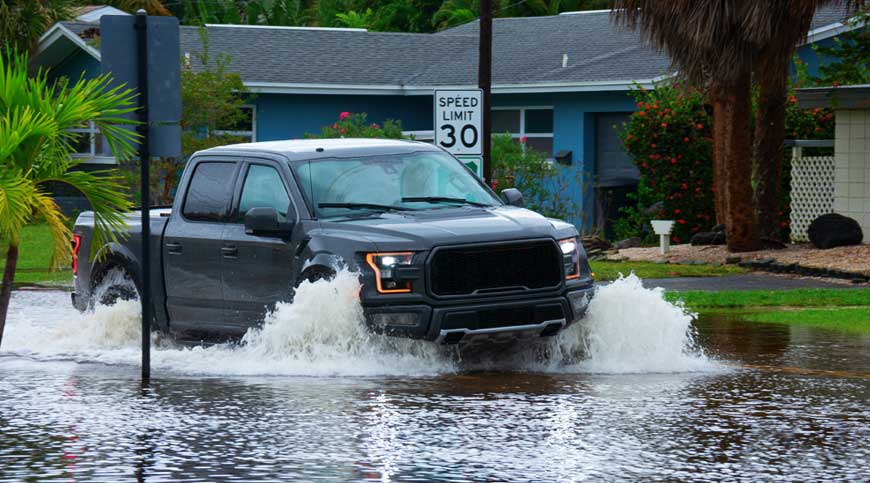 Floodwaters are one of the most dangerous road hazards, and they should be treated as such. Vehicle moving through flood water. Ford Raptor 4x4.

During and after periods of heavy rain, one has to be extra careful while driving, not only because of the slippery road and the reduced visibility but also due to the hazard of floodwaters. Driving through a flooded road is highly ill-advised; it can not only extensively damage your vehicle but also even possibly endanger your life.

Here are 9 reasons why you shouldn’t
drive your car through floodwater.

1. You Don’t Know What is Beneath the Water

By that, we don’t obviously mean a shark or a gator but rather the underlying condition of the road. Hiding beneath the calm water surface could be an extensively damaged pavement, out of place drain and manhole covers, deep potholes, or worse, a massive sinkhole just waiting for your car to come along and fall in.

2. You May Underestimate the Depth of the Water

According to the National Weather Service, more than half of all flood-related drownings are a result of cars being driven into hazardous flood water. What may appear as a shallow body of water over the road may actually be deep enough to completely engulf your car and you with it.

Once you are submerged inside those murky waters, it can be incredibly difficult to get out of your car as the water pressure prevents you from being able to open the car door. Slowly, water starts entering your car as it sinks with you trapped inside of it. There is never a legitimate enough reason to take such great risks – turn around, don’t’ drown.

3. You and Your Car Could Be Swept Away

Driving over flood water is especially dangerous when it’s moving. Just a foot of water is enough to float most cars, and if the current is strong enough, sweep them away as well. Being pushed downstream, there is a high chance your vehicle could end up being swept into a deeper body of water or get extensively damaged by moving debris and objects in the water.

Those driving off-roaders shouldn’t think that they are immune either. Increase the water level by another foot, and it is enough to dislodge a heavy 4×4 off the road.

4. It Can Hydro-lock Your Engine

Your engine needs to be continuously fed with fresh air to facilitate its combustion process. However, if water gets near the intake, it is definitely going inside of your engine, seizing it as a result. This can possibly translate to a heavy cost in repairs or, in the worst-case scenario, even a complete replacement.

A body of water doesn’t have to be even that much deep to enter your engine compartment. Just driving through six inches of water is enough to carry such risks.

5. It Can Damage Your Electronics

Prolonged exposure to flood water can cause extensive damage to your car’s electrical wiring and systems. Since in many modern cars, even basic functions such as the engine running are controlled by computers, any damage to them can have severe implications, such as the car even refusing to start. Having repairs and replacement done of your car’s electronic parts is certainly going to be both costly and time-consuming.

6. It Can Contaminate Vital Fluids

If the water has entered into the engine compartment, another risk is it leading to the contamination of vital fluids such as the car’s engine oil, transmission oil, and differential fluid. These liquids help keep the various mechanical components of your car properly lubricated and clear of any debris as well as dissipate excess heat.

However, if mixed with water, they will no longer be able to perform their functions properly. Driving with flood water-contaminated fluids can lead to excessive friction, heat, and abrasion, causing premature wear on the car’s internals, risking component failure.

When exposed to water, metal will rust. Your car is basically a complexly engineered box of metal, and it should be treated as such. Water doesn’t discriminate on where it enters and what it comes in contact with. Any metallic part of your vehicle that isn’t properly protected will start rusting after being exposed to the floodwater. Worse still, by the time you may become aware of the problem, it may well be too late to implement a cost-effective fix.

8. You Can Get Electrocuted

Electricity passes through the path of least resistance, which means you are normally safe within your car, unless that is, water gets inside. Water is a conductor of electricity. If there are any drowned wires in the body of water that your car sunk in, there is a high risk of you getting electrocuted.

9. You Car’s Interior is Going to Smell Horribly

Flood water is incredibly filthy, being composed of not just rainwater but sewage, street chemicals and pollutants, and various detritus. When driving over inundated roads, your car may be taking in liters of such water without you being aware of it. In the dark and poorly ventilated confines of your vehicle, the entry of floodwater can lead to the proliferation of mold and bacteria, giving your car a horrible smell and unhealthy air quality, which might only go away after a thorough and expensive clean-up.

Driving through at floodwater in the best-case scenario entails a few repairs done the road, and at worst, it means a great endangerment of your life. Whenever you encounter a flooded section of the road, always try to avoid going through it if possible. The better option is to take a different route or park your vehicle somewhere safe until the water has receded.

Residing in Philadelphia and in need of a professional inspection and servicing? PA Auto Inspection is your one-stop for all your car maintenance needs. To schedule a service, call (215) 259-7500 or use our online Service Scheduler here.